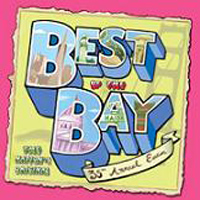 “The great myth about cab drivers is that they’re a bunch of underappreciated geniuses who write poetry and paint masterpieces when they’re not busy shuttling drunks around. Most cabbies, however, aren’t Picassos with pine-scent air fresheners. They clock in and out just like we all do, and then they go home and watch reality TV. There are, however, a few exceptions to the rule: true artists who have deliberately chosen the cabbie lifestyle because it allows them the freedom to pursue their passions on the side. MC Mars is such a cabbie. A 20-year veteran on the taxi scene, Mars is also a hip-hop performer, a published author, and an HIV activist. You can check his flow every Wednesday night at the Royale’s open-mic sessions. Or, if you’re lucky enough to hail his DeSoto, you can get a free backseat show on weekends. And don’t forget to pick up his latest CD, “Letz Cabalaborate,” available on Mars’ Web site. ” —San Francisco Bay Guardian, 2009

“M.C. Mars is to San Francisco as Lou Reed is to New York. In other words, he belongs to the city, knows its every buried secret; after all, would you expect less from somebody who’s been a cab driver for 30 years? Mars has seen and heard it all. Like Reed, Mars writes unflinchingly of drugs and kinky sex and the damage done – in this case, the spectre of AIDS always hovering like a black cloud.” —Julian Wilson, Trans Europe Xpress

“What startled me most about Mars’ lyrics is not the salty dialogue; those of us who live with hip-hop can no longer be shocked by bad words. The surprise is in how smart Mars’ writing is, an explosive mix of Beat poetry intellectualism and underground rap vulgarity. If Lenny Bruce had lived long enough to front a hip-hop outfit, it’d sound like what Mars is doing here.” —Howie Mitchell, Fear Of A Rap Planet

“When M.C. Mars’ album arrived in our office, there was a mad tumble among staffers for it who mistakenly thought that Dennis Hopper had released a rap record under pseudonym. Yes, if you look at the album cover, Mars does somewhat resemble Hopper. However, he is his own person and possibly one of the most articulate and frank rappers in years.” —Kyrby Raine, Overground Underground

At The Boom Boom Room
every Sunday Night 10pm-2am

The first Wednesday of every month at The Showdown (10 Sixth Street, San Francisco) at 11pm with Rebel Alliance.