The T-Shirt as Novel 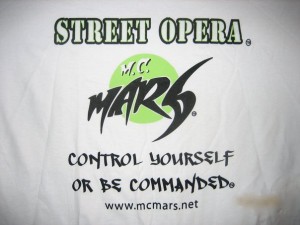 At a time when some people argue that the Gutenberg Universe is dead, and books are quickly becoming obsolete, and Amazon.com is desperately trying to sell us on the practicality of the Kindle— the time has come for a novel in the form of a T-shirt. Although I lay claim to this concept—this particular fusion of fashion and literature— I would expect you to be skeptical at this point.

The great Italian novelist, Italo Calvino, wrote an essay[1] on concise literature, in which he said: “I dream of immense cosmologies, sagas and epics all reduced to the dimensions of an epigram”.

When I first read this statement I was on the Elliptical machine at the gym, moving my make-believe skis in a counter-clockwise groove, and BAM, I stopped dead in my tracks. I walked over to the nearest mirror, put Calvino’s book up to my chest[2] and tried to imagine draining all of the text into a singularly potent phrase, a phrase that would capture the entire book and distil it to its essence.

This is how I came up with the concept of the T-shirt/ novel. That’s the Hollywood version, anyway.

“You see how ridiculous you have to think, in order to make this work?” These are the words of Robert Rauschenberg, a daring innovator, counted among the most influential artists of the second half of the Twentieth Century. The statement refers to his famous painting called “Erased De Kooning”, in which he actually spent a month erasing—oil paint, charcoal, pencil and crayon—from the canvas of another master, named Willem De Kooning.

For Rauschenberg, this was not a gesture of protest, or a challenge to a reigning master, or an act of vandalism, or a media stunt—it was poetry. Just as this T-shirt/novel, this fusion of fashion and literature is poetry. I bring up Rauschenberg to give you one example out of many historical precedents validating this T-shirt/ novel.

The slogan for my T-shirt/novel comes from Friedrich Nietzsche, who said, “ He who cannot obey himself will be commanded. That is the nature of living creatures.” With a change of the reflexive pronoun, the statement seems custom made for a dominatrix with a riding crop in her hand. And this goes to the heart of what the T-shirt/ novel is. In my one-line novel there is no definite story line. There’s only the premise, which in this case is—“control yourself or be commanded.” Or, framed in the language of a proposition leading to a conclusion[3], “he who cannot control himself will be commanded.”

But here’s the big difference.

In the traditional story the premise is submerged. It is the unspoken raison d’être driving the action. In the one-line novel the premise is all there is. Or at any rate, it’s the only thing known.

In the one-line novel the storyline is submerged, and not even the title is known. Only the premise exists, and as such it can give birth to a multitude of stories that go in all kinds of directions. You create the circumstances, the setting, the title, the plot, the mood and the characters. Just like with your Ipod— you can customize your own stories. You can hold hundreds, even thousands of stories in a convient one-line premise.

In this way, each novel is unique to its wearer.

In a society that fosters dependency, where people are aimlessly drifting, the T-shirt/ novel is an indispensable aid. It gives the wearer a clear-cut sense of purpose. The bold slogan, which he’s reminded of every time he looks in the mirror, helps him confront deadlocks. It provides him with a “core mission” so to speak.

And suddenly in a single stroke the T-shirt/ novel reverses a worldwide trend. Whereas the number of people who read books has been dwindling steadily over recent decades we now have (appearing out of nowhere) a new reading audience of 300 million people.

Where do I come up with this number? According to the American Psychiatric Institute an estimated 5% of the global population has ADHD (Attention Deficit Hyperactivity Disorder).

In the blink of an eye, everyone is a speed-reader. Everyone is well read!

Yes…problems with distractibility, procrastination, organization, and prioritization are not going go away over night. In the age of the X-box, they’ll to be with us for a long time to come—but imagine how T-shirt/novel will raise self-esteem around the world!

Look, I’m not saying that the T-shirt/novel is the greatest thing since sliced bread. Nor am I suggesting that one go into Victoria’s Secret looking for the Brothers Karamazov. What I am saying is this: in the T-shirt novel fashion and literature do intersect.

At The Boom Boom Room
every Sunday Night 10pm-2am

The first Wednesday of every month at The Showdown (10 Sixth Street, San Francisco) at 11pm with Rebel Alliance.